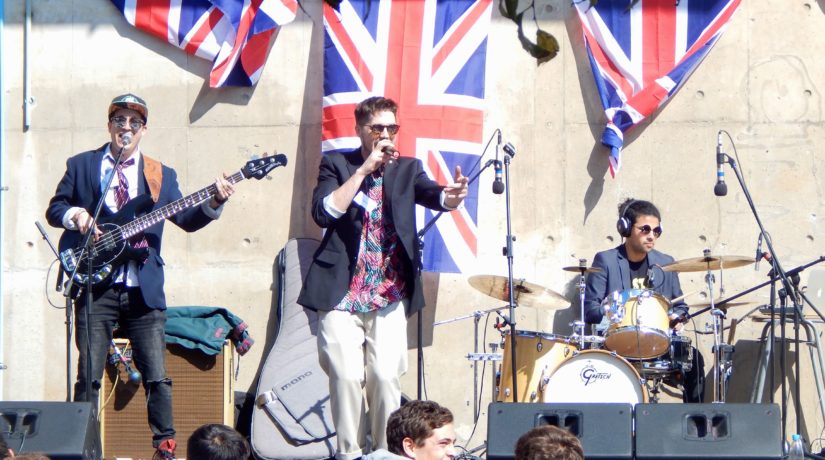 In the morning of the first day of British Week, on 22 April, the whole student body of The Mackay School was gathered to start and celebrate Book Day. The festivities included live music from several students, a speech contest, and short stories made by many teachers. Most importantly, however was the theme of British Week (and related to Book Day) “A Reader Today, a Leader Tomorrow”. So much emphasis was put on a national education problem that is…reading. So the general message throughout the week was to encourage students to read and emphasize the importance of literature for everyone. As later on that same day there were two seminars: “The Literary Worlds of Fatelessness and To Kill a Mockingbird” by Julio Uribe and “The Literary World of Virgina Woolf” by Michelle Prain. The former had professor Julio Uribe (former Mackay english teacher) do a webinar from Melbourne, Australia to the IV Medio students of Language and Literature. Several in attendance were even former students. So it made for a hospitable environment for the session in the library. The last seminar took place in the school’s auditorium with Michelle Prain. In attendance were Language and Literature students from III Medio and II Medio.   On the second day of British Week the Interhouse Writing Competition took place. It was held in the library where one representative from each house (I medio – IV medio) competed in making the best short story related to the following prompt: “”. Including the elements of an ancient book, the author, and The Mackay School. After an allotted time of 45 minutes, english teacher Einar Galleno reviewed the results meticulously. The following result was close! With a difference of point between each competitor.1st place: Maximiliano Garcia (20 points for Mackay House)2nd place: Vicente Gonzalez (15 points for the Sutherland house)3rd place: José Ignacio Comas (10 points for the Robertson house)4th place: José Ignacio Escobar (5 points for the Somerscales house)However, on the third day another competition took place in the form of a Spelling Bee for the 6th graders. The competition was a tough one with three representatives from each house. In the finals there was a three way tie and then it went to down to students in a sudden death where the judges almost ran out of words to give!1st place: Somerscales (20 points)2nd place: Mackay (15 points)3rd place: Robertson (10 points)4th place: Sutherland (5 points)On the following day (Thursday) there was drama intervention for juniors during recess. The play involved Elvis and Sherlock Holmes mystery and took place in Callanish. The kids were very much entertained with a all the action and funny moments that it was a huge success. English teachers Veronica Cordero and Paz Allendes directed the play.Last, but not least was Dress Up Day where everyone at The Mackay School had to dress up as their favorite literary character. There were many who dressed up as their favorite Avenger superhero and others as characters from various children books. There was a pizza party prize given to the best dressed form class in junior and in senior.Overall, British Week was a huge success due to the participation seen from everyone. The spirit of the school definitely reflected through each activity.