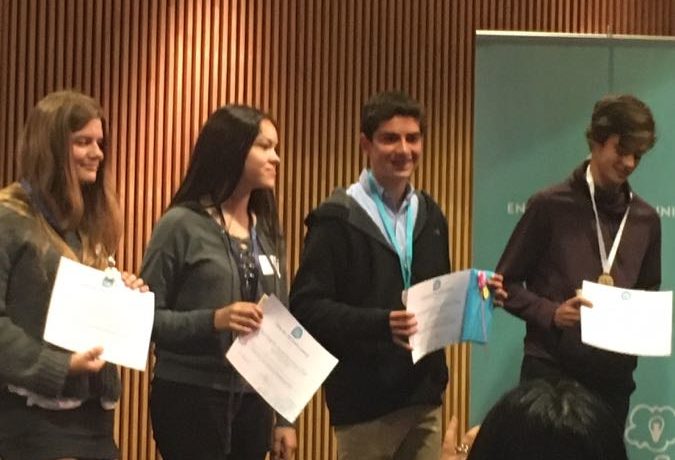 This Friday, 12th October,a group of 6 students travelled with Miss MaureenSteadto participate of the 7th Poetry Competition Contest held in Santiago at the Saint George’s College.

They left our school bright and early and arrived with plenty of time to visit the gardens and look around the school before going into the auditorium to begin our adventure.

After receiving instructions and listening to last year’s winner recite a poem about a pet snake, the contestants were divided into categories. José Ignacio Escobar and Luciano Zapata went off with the 8th graders, whilst Diego Brito and Roberto Welsch took after the 7th graders and Raimundo Biggs and Andrè Deglin followed the other 6th graders.

Each student had a go at reciting their poem in front of judges, some being more confidant than others!

After a short break where we had tea, coffee, cupcakes and other snacks, everybody gathered once again in the auditorium. There limericks were created and on to the final 4 in each category.

José Ignacio Escobar represented our school in the 8th grade category. He rocked all the audience reciting a poem about a terrifying substitute teacher!

After a brief musical interlude the judges came back with the results…..and José Ignacio won second place in a very tight contend! Well done!

Overall it a enrichening experience for our students and a well deserved medal for one of our students!

The students and their poems!

Raimundo Biggs, “It couldn’t be done”, by Edgar Guest

Andrè Deglin, “What is succeed?” by Ralph Waldo Emerson